So why should that be any different  in math?

Here’s an example from something I did today — I used color to show a shortcut for finding the perimeter of rectangular-ish objects.

I was tutoring a boy who had to find the perimeter of this figure: 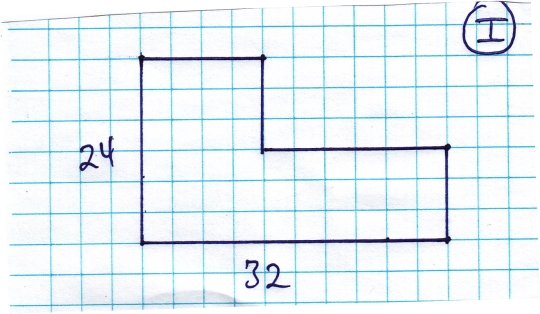 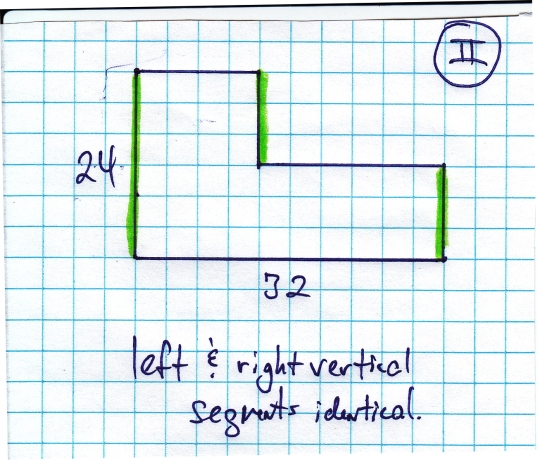 The student realized this after I colorized it. Then I used a different color, red, to show that the sum of the two horizontal segments on top equals the longer horizontal bottom segment, like this: 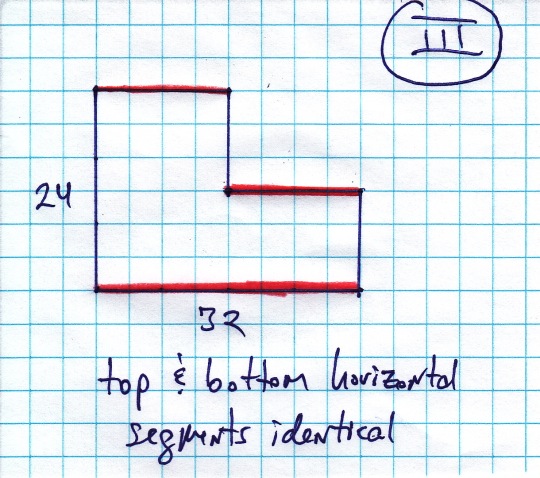 At this point I felt that the student was ready to see the math that relates to the whole figure, so I wrote the math, using color to relate the numbers to the colors of the sides of the figure, like this:

At this point the student was able to see the shortcut in this kind of problem, which together we wrote as follows:

This is a fairly basic example of how color can, quickly and effectively, illustrate math concepts. Feel free to share examples of how you use color in your math lessons. I’m curious to learn (and share) a variety of ways, for I see that color has great potential. Color Your Way to Integer Success


We all know that one of the trickiest subject for many students is the subject of combining integers.

I’ve hit on a new way to help students with this topic, a way that involves using color.

Here’s just one example of how using color can help students make sense of those oft-bewildering positive and negative numbers.

Many students get confused by a problem like this because they don’t have the least idea of what to do first.

But when you use color, tell students that the first step is an easy step:  just re-write the problem, making the positive numbers red, and the negative numbers blue, like this:

The next step is equally easy … group the positives on the left and the negatives on the right. I use my handy-dandy “double-slash” divider to show the separation, like this:

After that, use the rule for combining integers with the same sign (here you can say “with the same color!”), like this: 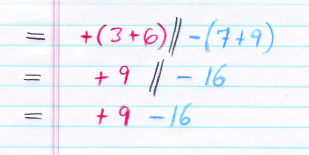 At this point you depart from color, as you combine the integers with different signs, and you get the answer, like this: 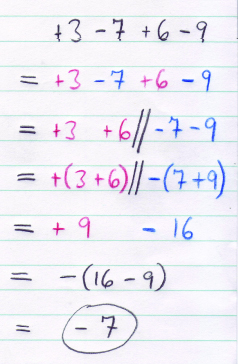 I have found this approach extremely helpful for those students — and you know the ones I’m talking about — who just struggle endlessly with these rules.

By the way, if you’d like to see the chapter of my Algebra Survival Guide, which explains the “Same-Sign” Rule and the “Mixed-Sign” Rule, just go to this page and scroll down about half-way down till you come to the link for downloading chapters:

Please try this out yourself and feel free to let me know how it goes. I’m always open to feedback.

How to Use Color to Explain Algebra Concepts

Lately I’ve been having great success using COLOR to explain algebraic concepts, as strange as that may seem.

I’ve found that is that adding color to equations helps students see important relationships among the terms, for it lets them visually group related terms.

This is impossible to explain without an example, right? So here’s one to show you how it’s done.

GOAL: Give students a way of understanding the following exponent rule, usually learned in Algebra II:

In explaining this rule, I first show students a common sense but critically important idea:

GIVEN: Two terms are equal to each other, and each term has two parts.

CONCLUSION: IF two of the parts are equal (blue), you can CONCLUDE that the other parts are also equal (pink).

Here’s a visual WITH COLOR that gets this idea across:

Next I help students recall an early math concept that uses this principle. In this case, the following example gives them a nice way of seeing this concept with color:

Finally I use this same color scheme to show the logic behind the Algebra II exponent rule, like this:

The conclusion, of course, is that THEREFORE x = y.

I get a lot of quiet “Now I Get Its” when I show this to Algebra II students.

The “Aha” looks that I get remind me that while this concept is obvious to me and you, many students don’t grasp it fully.

In any case, I wanted to share this because I’ve found that there’s great potential in using color to explain aspects of algebra. I hope that you find this useful, and I encourage you to use color yourself.

Just for the record, the rule I explain in this section is a very useful rule of exponents. To show you its use, I am including the example of a problem that requires its use, below: