How to Use Color to Explain Algebra Concepts

Lately I’ve been having great success using COLOR to explain algebraic concepts, as strange as that may seem.

I’ve found that is that adding color to equations helps students see important relationships among the terms, for it lets them visually group related terms.

This is impossible to explain without an example, right? So here’s one to show you how it’s done.

GOAL: Give students a way of understanding the following exponent rule, usually learned in Algebra II:

In explaining this rule, I first show students a common sense but critically important idea:

GIVEN: Two terms are equal to each other, and each term has two parts.

CONCLUSION: IF two of the parts are equal (blue), you can CONCLUDE that the other parts are also equal (pink).

Here’s a visual WITH COLOR that gets this idea across: 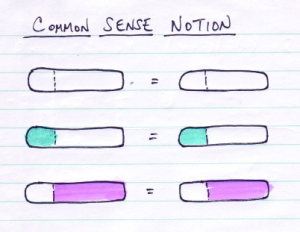 Next I help students recall an early math concept that uses this principle. In this case, the following example gives them a nice way of seeing this concept with color: 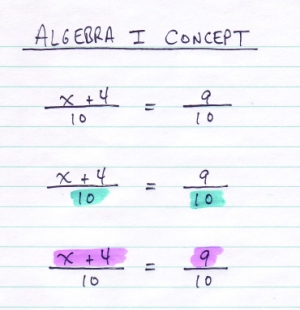 Finally I use this same color scheme to show the logic behind the Algebra II exponent rule, like this:

The conclusion, of course, is that THEREFORE x = y.

I get a lot of quiet “Now I Get Its” when I show this to Algebra II students.

The “Aha” looks that I get remind me that while this concept is obvious to me and you, many students don’t grasp it fully.

In any case, I wanted to share this because I’ve found that there’s great potential in using color to explain aspects of algebra. I hope that you find this useful, and I encourage you to use color yourself.

Just for the record, the rule I explain in this section is a very useful rule of exponents. To show you its use, I am including the example of a problem that requires its use, below: 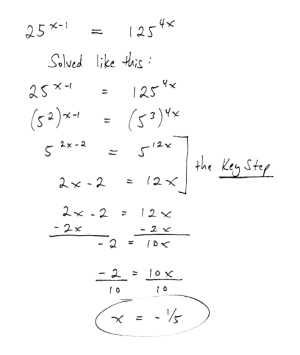